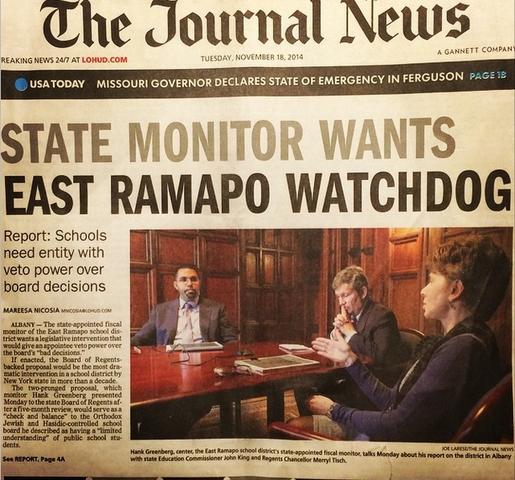 Monitor Greenberg Shares His Report With The Board of Regents 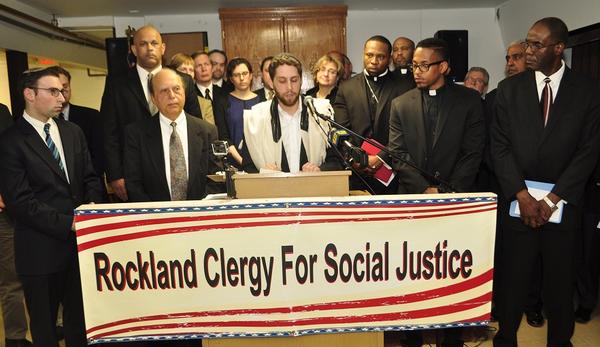 Press Conference, Rockland Clergy For Social Justice
‹ ›
New York State Education Department appointee Henry M. Greenberg has found that the East Ramapo Central School District is "on the brink of collapse...controlled by persons whose primary goals are now to best support the private schools their children attend and not the East Ramapo public schools."

This campaign aims to win passage of a bill that would bring strong state oversight to East Ramapo and long-awaited educational equity to the children of the district.

Your donation will help Rockland Clergy for Social Justice to finance travel to Albany to lobby lawmakers, as well as to publicize news of this legislation to potential supporters both within Rockland County and across New York State.  Donate here.

After almost a decade of advocacy by community groups, Mr. Greenberg called for state legislation appointing a fiscal monitor to override the decisions of the board, modeled after a similar approach in Lakewood, New Jersey.  We agree, and we further believe that the children of East Ramapo deserve a proactive visionary leader who has their best interests in mind and has the real-time authority to shape district policy accordingly.

It will require a formidable effort to pass this legislation, sponsored by Assembly Member Ellen Jaffee, Assembly Member Ken Zebrowski and State Senator David Carlucci.  The school board is not merely opposed to the State’s recommendation for a fiscal monitor; it has retained an Albany lobbyist to thwart legislation for a monitor with authority (at a cost of $7000/month coming from school district funds).

In order for our grassroots effort to have a chance against this formidable institutional power, we have secured the help of a well-respected government relations firm to help monitor the legislative process and offer us guidance.   We learned on January 12 that the firm has agreed to represent us pro bono.  Therefore, we will only need your help to supplement their work, including travel expenses for our advocates to travel to Albany to lobby lawmakers, as well as publicity expenses to raise awareness across New York State.  (Fundraising goals to be adjusted in the next week.)  Please support the efforts of Rockland Clergy for Social Justice to secure passage of a bill that would bring strong state oversight to East Ramapo.
Share This Campaign: